Today is the last day of our long weekend away from Singapore. My friend and I decided to walk around and see as many landmarks as possible. Surprisingly enough, the city has plenty to offer, maybe not as much as it rival in the north namely Hanoi, but enough to satisfy any international traveler looking for exoticism.

But first thing first, FOOD. It was 11am and we were very hungry. We checked-in at a restaurant in Pham Ngu Lao area. There I ordered Vietnamese coffee with condensed milk, a Pho, and a veggie salad for my friend. 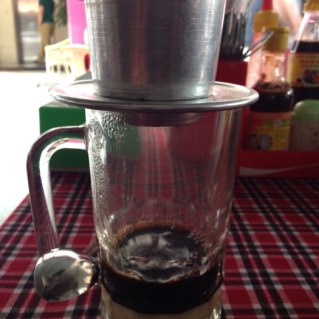 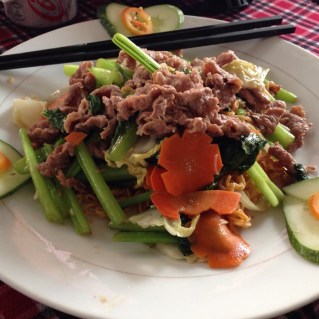 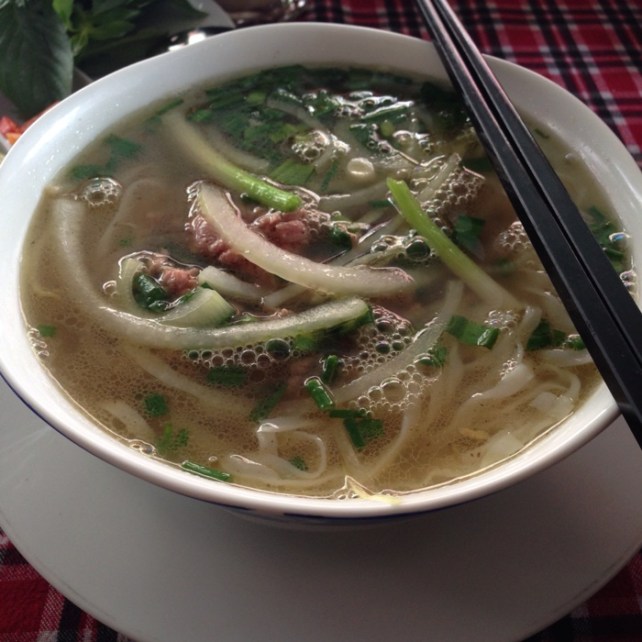 The coffee was strong and bitter but sweeten by the condensed milk. Also, I found that coffee glass design nice, simple but nice. The food was okay; nothing special to mention there; when you’re hungry you eat!

We walked towards the Ben Thanh market, a large marketplace popular with tourist seeking local handicrafts, textiles, and souvenirs. You also can get wet products such as fruits, meats, and even taste local cuisine. 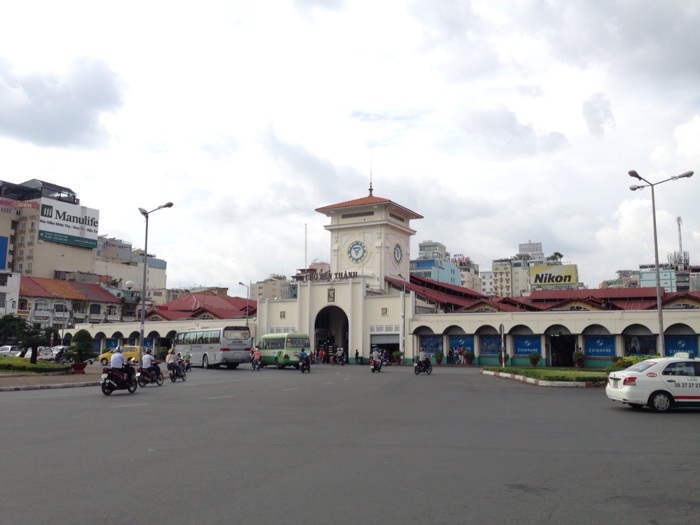 As we kept walking heading North, we pass next to the Ho Chi Minh City Hall. The building was in renovation. It was built in the early of 20th century in a French colonial style. 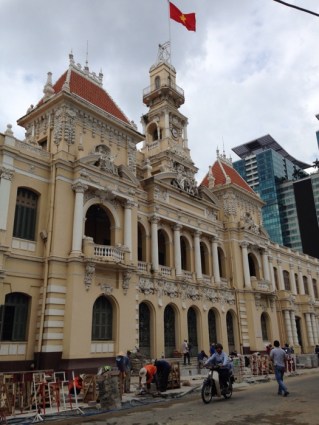 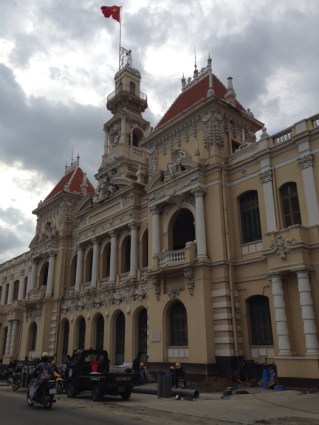 Two minutes away from city hall is the Municipal Theatre, also known as Saigon Opera House. It is the main opera house in the city; its architecture is another example of the French heritage of the country. 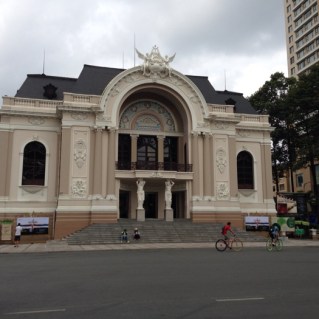 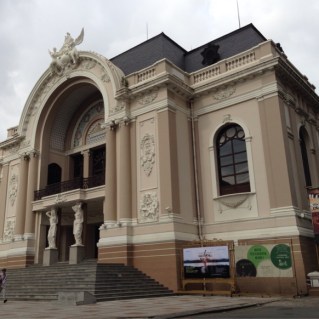 Next, we were heading west to the Saigon Notre-Dame Basilica officially known as Basilica of Our Lady of The Immaculate Conception. French colonists established the cathedral during the second half of the 19th century. The cathedral is splendid and very noticeable with it reddish color from the bricks. 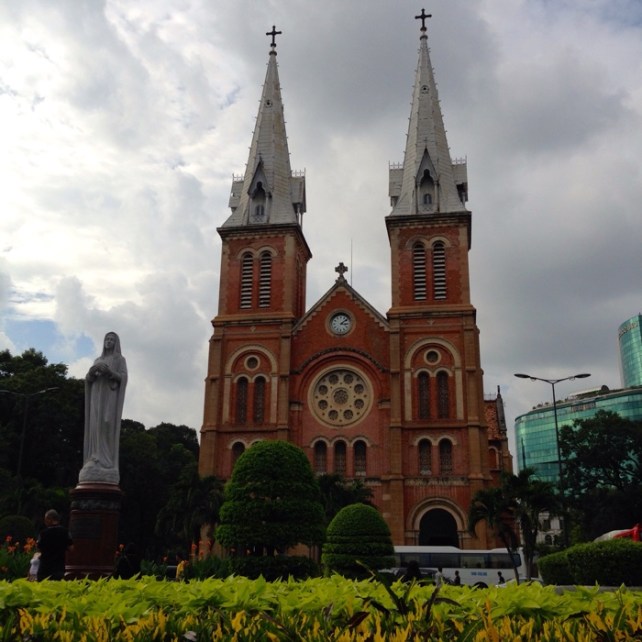 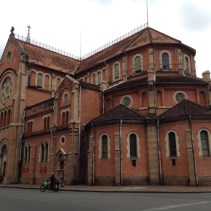 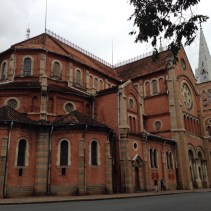 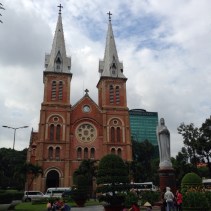 Right next to the cathedral is the Saigon Central Post Office, with its neoclassical architecture. The building was designed and constructed by the famous architect Gustave Eiffel. It’s a beautiful building, outside and inside. 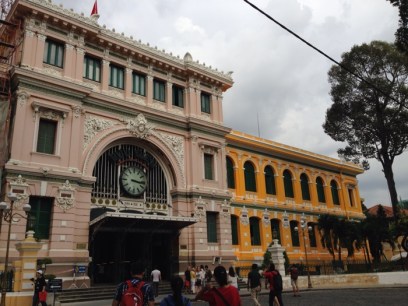 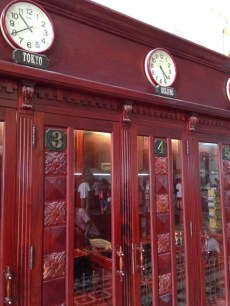 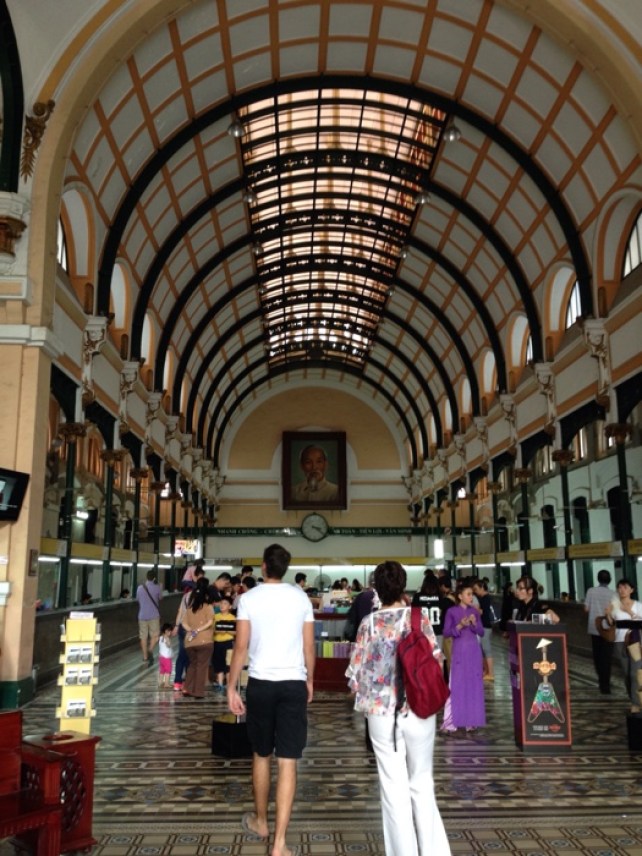 Our next landmark is the Unification Palace, to get there we go through a public park call Cong Vien 30-4. The park is cool and relaxing. There, kids, youngsters, couples, and families chilled with many street foods, music, and folkloric atmosphere. We were there on a Sunday so you can imagine the ambiance, just imagine yourself in Hyde Park or Central Park on a Sunday afternoon. (Okay, the park isn’t near close to these two but you get the picture)

The Reunification Palace or Independence Palace is a landmark in the city; it was the site of the end of the Vietnam War in 1975.

The Reunification Palace or Independence Palace 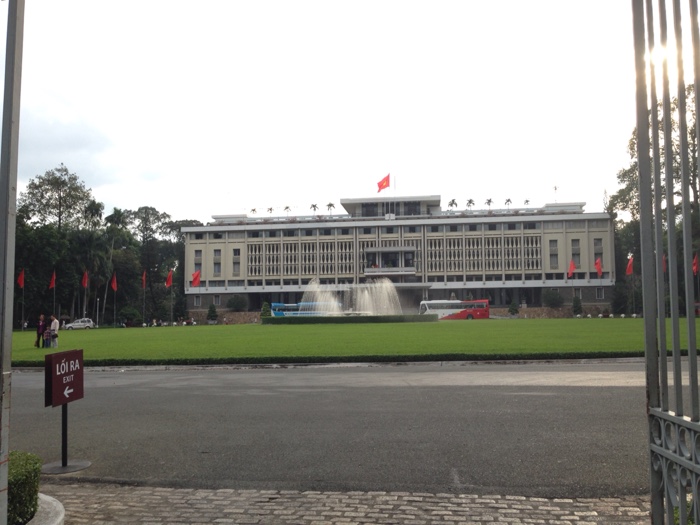 Our final landmark or rather visit was at the Xa Loi Pagoda, simply put it is the largest pagoda in the city and was for a while the headquarters of Buddhism in South Vietnam. 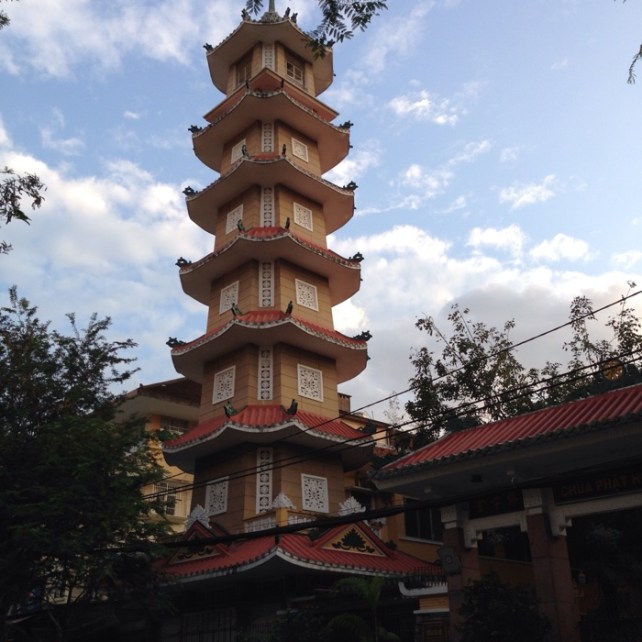 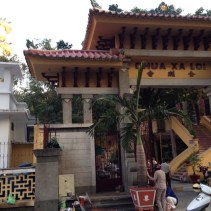 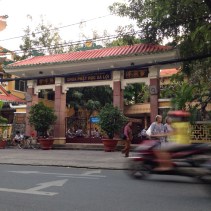 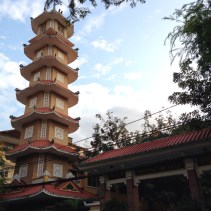 Nearby the hotel, I had for dinner chicken with curry Vietnamese style, accompanied with rice. 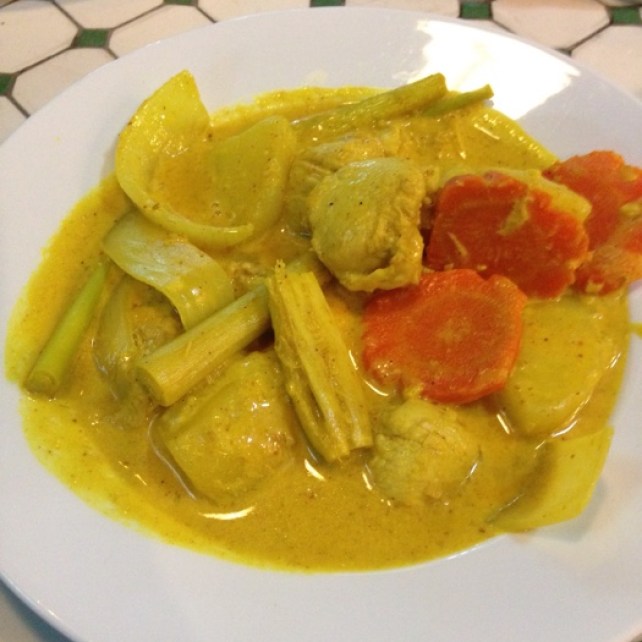 We went for a last drink, and shortly after back to the hotel, as our flight to Singapore was early in the morning.

Overall, Ho Chi Minh City is more live, busy, and crowded than Hanoi. It is also more Americanize as oppose to “Frenchnize”. Some will like it other will dislike it. I’ll say it depends on what you are looking for. If you want to party, enjoy some good food, but still be in a local setting where you can have local flavors on anything — Saigon is the right spot. If you are looking for the same but want to add a tiny bit of cultural stuff, want to learn more about the French heritage, then I strongly recommend a visit to Hanoi.

I came for a quick getaway from Singapore; Ho Chi Minh City offered me what I needed. Some sightseeing, cool weather, food, and a great night scene!!