Ho Chi Minh City is a great place to hang out, enjoy a variety of food, and party hard. However, sightseeing in the city itself is limited, at least compared to the northern city of Hanoi. My friend and I decided to head south to see one of the main attraction surrounding Ho Chi Minh City, the Cai Rang floating market, in the Lower Mekong River. 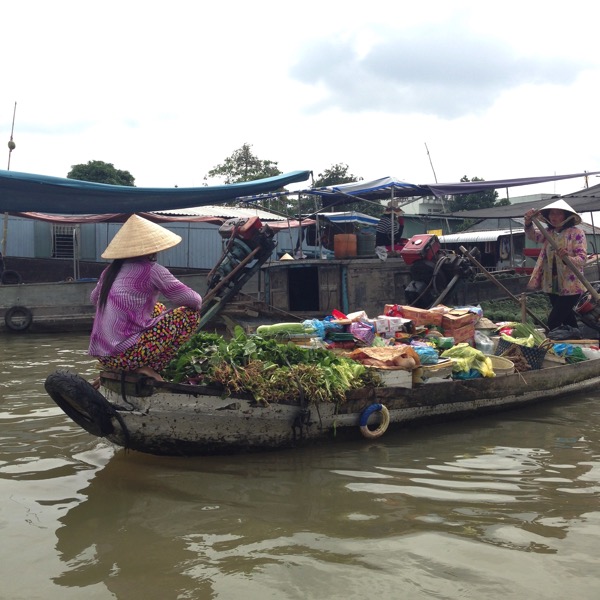 To get there from HCMC, you either go with a travel agency or by your own. If you’re planning a one-day trip, I strongly recommend the former. We went on our own for a one-day trip. Yes, I know the exact contrary of my recommendation.

Overall journey is the following:

The reason we left so early is that the floating market is only open from 9am to 11am. Knowing that HCMC to Can Tho takes about 3 hours, we hoped by leaving early we could still see the end of the market.

II) Mien Tay bus station to Can Tho 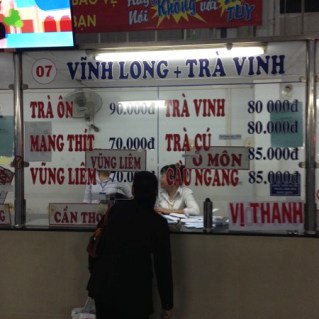 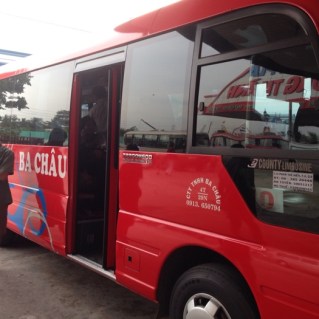 At the station, look for the counter that sells tickets to Can Tho. Can Tho is the main city from where you take a boat to get to the Cai Rang floating market. Bus prices vary from 130k dong to 80k dong. The cheap option picks up and drops passengers along the way, whereas expensive bus goes supposedly straight to the destination. We took the cheaper option, left at 6am, and arrived at Can Tho around 9:20am. 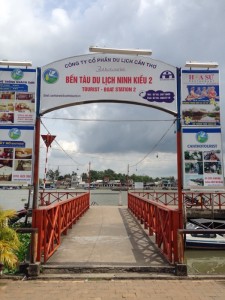 III) Can Tho to the boat station
South East Asian traveller will know the feeling — As soon as we arrived and alighted the bus, a bunch of taxi/motorbike driver chased us and asked where we were going. I said the boat station for the floating market – a scooter brought us there for 30k dong. The ride is a bit more than 5 minutes, and you get to see the city of Can Tho.

At the boat station, we paid 10 USD each (we might have get screwed) to get on a slow and small motor boat. 9:40am, we were on the Mekong River towards the Cai Rang floating market. 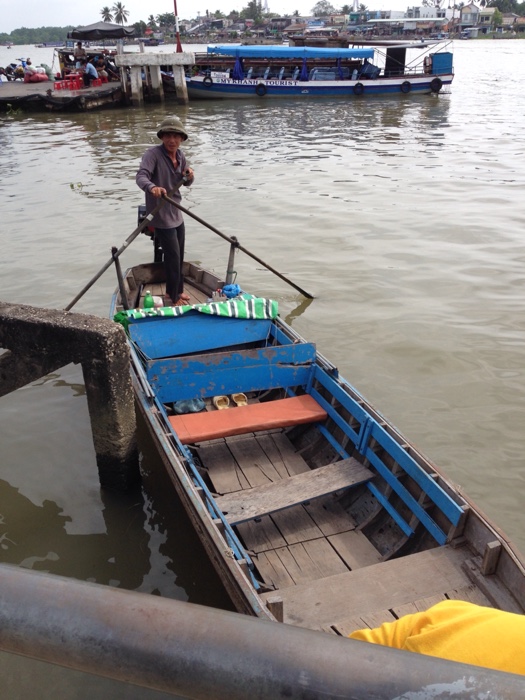 The journey lasts about an hour so be sure to bring water, as you most likely will get hit hard by the sun on the open air boat. The ride gives a chance to see the life around the river, with kids playing on the water, workers on docks, fisherman coming back or getting ready to work, and few other routine things. Overall it is not an amazing scenery, but still very much different from whatever you have at home. See for yourself. 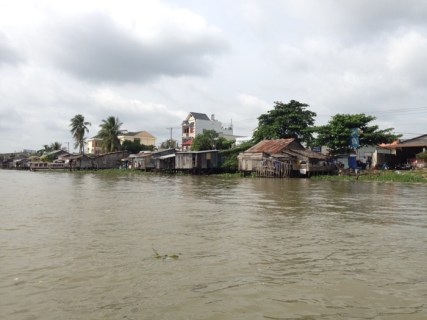 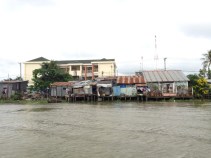 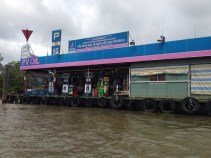 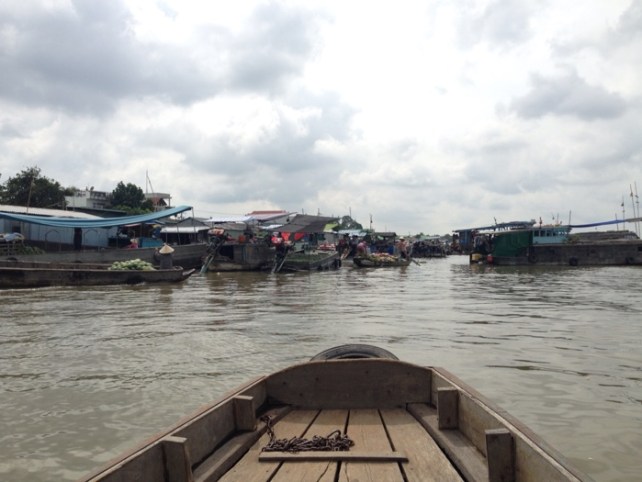 Almost an hour after, we reached the market and as expected it was almost the end. There were only a few merchants left, but no more buyers, rather few tourists like us taking shots, and admiring.

It is a shame we arrived too late; we probably should have tried to sleep in Can Tho the night before to fully enjoy it. Regardless, it is still amazing to think the same way people go on markets on “land”, other take their boat and go to a floating market. Cai Rang floating market is a wholesale market, with mainly food consumptions products (fruits, vegetables, etc.) Keep in mind, there are plenty of floating markets in this area, so do some research before adventuring yourself. The best way to go about it is to sit in a travel agency to see in detail what each market offers, and then do a Google search on how to get to your destination by your own. It’s usually not only a cheaper option, but also allow you to do things at your pace. 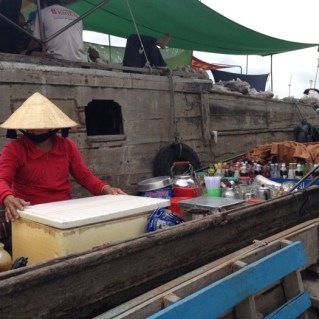 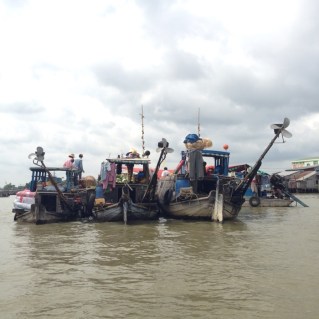 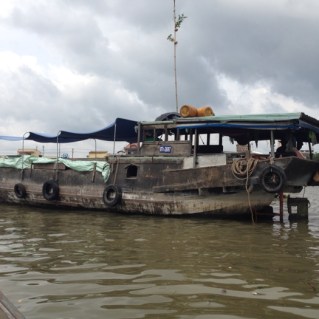 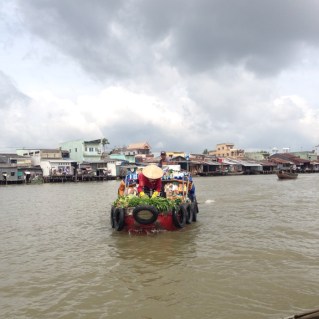 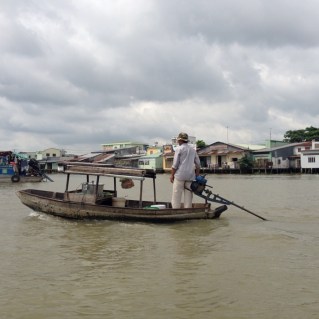 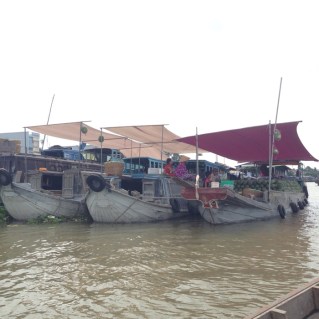 The boat tour also includes a short visit to a small noodles factory, where you can see “live” the full process of production. I made a short video with no comments as it should be self-explanatory.

As you may know, Vietnam cuisine typically used rice noodles. It has a different texture and flavour to the more commonly known wheat noodle or Italian Pasta. The next time you eat an Asian broth, compare the noodles from a Pho Bo (Vietnamese broth) with noodles from a Ramen (Japanese broth). The difference is even visual as the texture and color are different. If you want to know more about it, here is a great article http://www.seriouseats.com/2014/08/asian-noodle-shopping-guide.html to check.

After coming back from the market, we were hanging around Can Tho nearby the boat station, but this part of the city doesn’t offer much except for few market and restaurants. Very hungry, we grabbed a bite at a local restaurant — as much as it looks delicious, it was just okay. 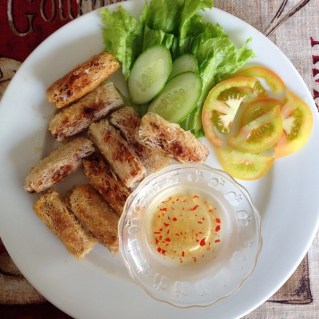 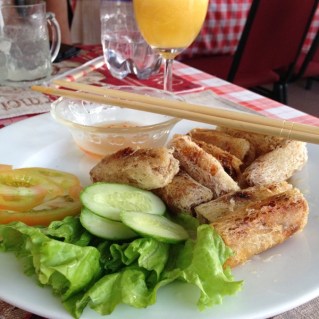 Lunch done, we went back to Can Tho bus station, and soon after we were on our way back to Saigon. We arrived at Mien Tay around 6pm and decided to take a bus back to our hotel. Bus 102 is direct to Ben Thanh bus station and cost 3k dong.

Later that night, we went to see a premiership game and then clubbing. Vietnamese folks know how to dance. The nightclub was touristic, but with plenty of locals. You could see it, when the dee-jay put some local songs, the crowd was going wild! I loved it!! 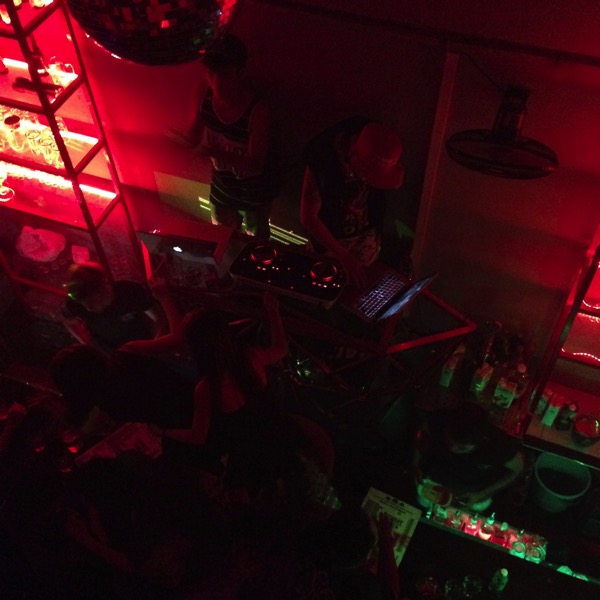 As anywhere in the world the night ended with some food. It is a kebab in Europe, Ba Ku Teh or Chicken rice in Singapore, Pizza slice in the United States, in Saigon, it was a mere omelet sandwich. Although no picture, I can guarantee you it was delicious!!

The day and the night have been good, tiring but good. The one-day trip to the Cai Rang floating market was exhausting, but since we only spend three days in the city it was needed. Of course, if you have more time make sure to sleep in Can Tho the night before and show up next morning as early as you can at the boat station. Tomorrow is our last day; we will chill and see what the city has to offer.